After years of talk about using the housing strategy here, Mayor Lori Lightfoot is proposing a pilot program. 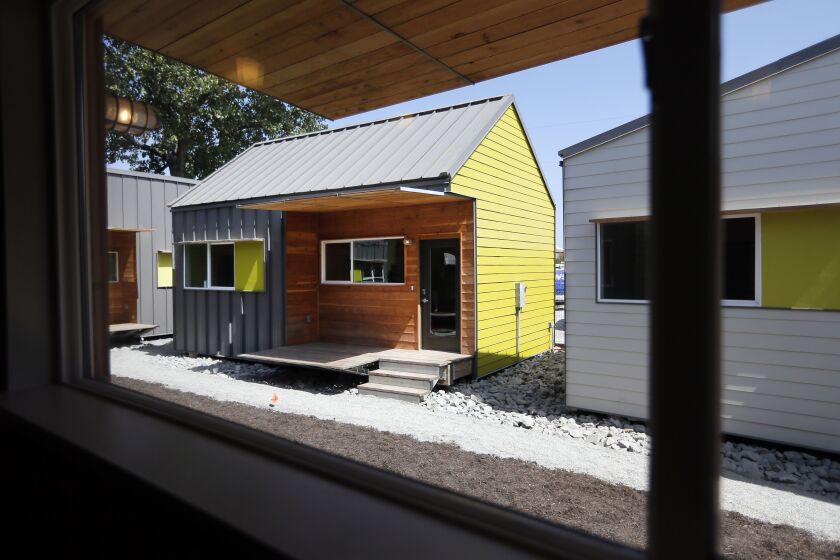 By all appearances, the great American love affair with stuff, and with big things to accommodate it, continues unabated.

People with the means buy big homes and big garages to hold stuff. We crave giant TV screens and hulking SUVs that usually carry, maybe, two people. Many pay for self-storage units, a whole home for the stuff we don’t have room for. Entire industries, and a lot of real estate, depend on how we impress via excess.

Many others, of course, can’t afford to do any of this or even to have a home. Others just have a different mindset. So in some quarters, there’s a counter-trend dealing with a simplified life on the cheap. And that inevitably involves the movement for tiny homes — two little words that can involve big ideas.

Communities of tiny homes have popped up in many places — California, Texas and Florida are among many examples. There’s an active push for tiny homes in Detroit. Some have been built overseas. A slew of motivations can be involved. The abodes can be stylish places for minimalist living, a budget Airbnb-type offering near resorts or a product conceived to help the homeless and those who can’t afford a bigger place.

Brien Cron, president and founder of Chicago Tiny House, a nonprofit organization, said such homes exist in every state near Chicago. Listing agencies report a few available as short-term rentals in Illinois, mostly in locales distant from Chicago. But within the city and the suburbs? Cron and others involved in this issue said they know of none.

It’s a source of frustration for Cron, considering he’s been working for about seven years as he strives to get immediate help to the homeless, especially in Uptown. He said he thought he made headway with staffers of former Mayor Rahm Emanuel, who invited proposals for tiny homes in 2018.

“It was bogus,” Cron said. “Emanuel was against the entire project from the get-go.”

Cron said he had a tentative deal with the city to get vacant city-owned land in places such as Englewood and West Humboldt Park, but then those parcels were handed to contractors to build standard single-family homes.

“It’s been a fight for the land all this time,” he said.

Now, under Mayor Lori Lightfoot, something new is afoot. In the documents for her 2023 budget, Lightfoot mentioned setting aside $3 million for a pilot project of tiny homes. Eugenia Orr, spokesperson for the city’s Housing Department, didn’t have much detail last week, but she said the cost would be drawn from federal funds allocated to Chicago for recovery from the pandemic.

Orr said the city plans to issue a “request for proposals” involving city-owned land during the second quarter of 2023. She had no answers about the scope of the project or what the city would be spending its money on, considering it already owns the land. Perhaps it would go for street improvements and sewer connections to hold down the cost of tiny homes.

Cron said that whatever the city does, he hopes it will give fair weight to proposals from nonprofits with a social mission and not simply favor developers. Working with the Chicago architecture firm Manske Dieckmann Thompson, Cron said he has been aiming for designs that can be built for about $25,000. Considering his own financing costs, Cron is devising a plan in which the tiny homes could be rented for around $300 a month, which he said would cover his group’s debt while generating cash to build others. His homes would be about 500 square feet, suitable for one or two people.

Lightfoot’s allies portray the initiative for tiny homes as an outgrowth of the city’s experiment with additional dwelling units such as coach houses that can be added to a residential lot. But tiny homes could be a hard sell. Much will depend on how the developments are designed and managed. Many units built in other states look attractive. A few call to mind the migrant housing in “The Grapes of Wrath.” Other plans look like little more than glorified toolsheds.

As for those who close their minds to the concept, Cron said, “It’s just ignorance. They don’t know what these homes are and how they can help people.”

Some alderpersons have backed tiny homes. When Emanuel floated his plan, he got support from Ald. Edward Burke (14th).

“These tiny houses afford a level of privacy unavailable in crowded and often dangerous homeless shelters,” the Southwest Side alderman said.

“We certainly don’t wish to see the emergence of modern-day shantytowns or Hoovervilles in our city. Instead, we should explore the possibility of creating well-maintained communities of people given new purpose in life,” Burke said, speaking in 2017.

That’s still a fair way to sum up a situation of growing need.

Free Logo - T-shirt
Access to podcasts
Access To all News articals
10% off all purchases made during an active subscriber period.
Free 2 day email support included.

All these features are included for just $39.99 / year

Cannot be used with any other available offer.